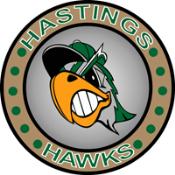 Welcome
This is the official site of Hastings Hawks

The Hastings Hawks were established in 1982 and their first opponent was the Hampton Cardinals.

The Hawks have been to the State Tournament…

Hawks moved to VETERANS ATHLETIC COMPLEX in 1983 and have called it HOME ever since!